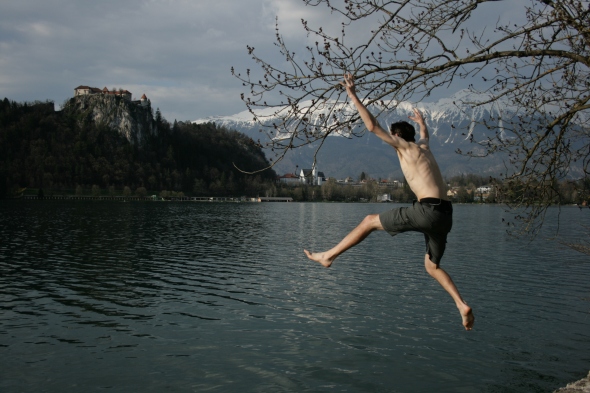 Rob leaping into Lake Bled, after a long day of cycling.

After one aborted attempted at crossing the border into Croatia, we finally left the EU, and Slovenia, behind on Saturday. Quickly, what were clearly marked as major roads on our maps, turned out to be dirt tracks.

Andrew and Josh on a “major” Croatian road.

With a new country, came a new challenge. Andrew had 40 Croatian Kuna with him (about £4.80) and, with only one day’s cycling between Slovenia and Bosnia, we decided that this was all the money that we would use whilst in Croatia. However, the “40 Kuna Challenge”, as it became known, ended up being rather anticlimatic. We soon realised that the day in question was a Sunday. With all the shops likely to be closed, we ended up stocking up on food in Slovenia. This rather undermined the spirit of the challenge. Therefore, rather predictably, our 40 Kuna was soon converted into three large beers and a generous tip.

From Croatia, we headed into Bosnia. As we neared the border, the traces of the war intensified. The houses were more frequently pockmarked with bullet holes and we encountered our first (well signposted!) minefield.

Fancy a picnic in the woods?

Mines have become more of an issue now that we have entered Bosnia and factor heavily into our route planning. Whilst the threat of being blown to pieces is very low, if you are sensible, you are constantly aware of the fact that the country still contains around 5 million mines. Wild camping is out of the question and wandering into the woods is a risky, and unwise, business. This said, we have been sticking to paved roads and staying in guesthouses or municipal camping areas, so are certainly much safer than the average Bosnian.

In fact, so far Bosnia has made for some fascinating cycling. We crossed the border from Croatia near the town of Bihać (hence the title), which is in one of the more heavily mined regions of Bosnia. Bihać proved to be an interesting place and we benefited greatly from the generous hospitality of our host, Adnel, who runs a small guesthouse. Upon leaving Bihać, we were amazed by the empty nature of the landscape either side of the roads. There are many derelict (and bullet-scarred) houses, but the presence of  landmines means that there is very little in terms of settlements away from the main roads. From what we have seen, we can only assume that large swathes of Bosnia remain relatively uninhabitated.

And the term “main roads” is a slight misnomer. We have been cycling along the biggest roads in the country and they are incredibly quiet. Especially considering they are the only paved roads in most of Bosnia. On top of this, despite a fearsome reputation, Bosnian drivers have been incredibly friendly and frequently urge us onwards as they pass. Unnervingly, they seem far keener to risk their own lives, and those of oncoming drivers, than to pass too close to us!

The view from our Guesthouse in Jajce.

As of now, we are in the picturesque and historic town of Jajce, about half way between Bihać and Mostar. Assuming things go to plan, within the next week we should be entering our next, and eighth, country; Montenegro. 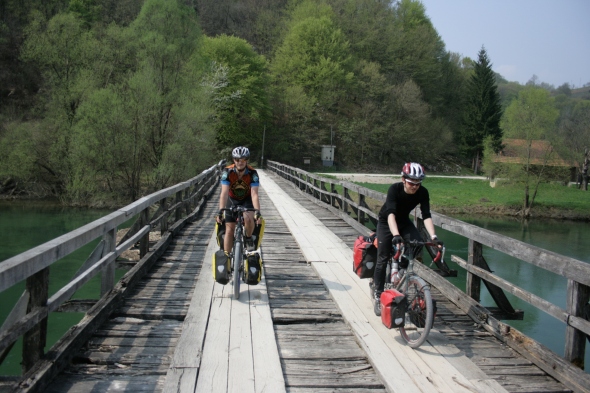 Us riding across the sturdiest bridge in Croatia.

A friendly Croatian family who refilled our water bottles.

Currently, we are unable to upload photos from Andrew’s camera, but hope to resolve this soon. Apologies to anyone we took photos with – we will upload them soon!