Back on two wheels, at last.

After almost two bike-free weeks, we were all pleased to be reunited with our trusty steeds. We found them safe and sound where we had left them, in Bar, Montenegro. Our time cycling in Montenegro was brief, however, and it only took a morning’s pedalling to reach the Albanian border. 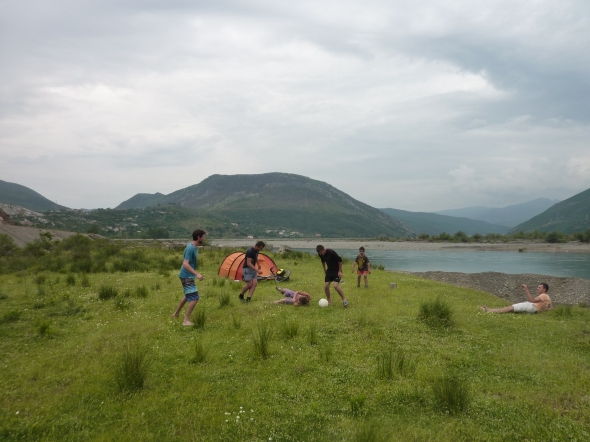 Our footballing heroics in Albania.

Albania represented the ninth country that we have been through and it certainly ranks among the least developed of them. Despite this, or perhaps because of this, we were granted celebrity status upon entry. We could not pass by locals, particularly kids, without having ‘Ciao’, ‘Hello’, or ‘Where are you from?’ shouted towards us. The friendliness was inspiring and it was not surprising when a group of local kids congregated around our tent on the first evening. Despite the fact that we were camped on uneven grassy scrub-land, strewn with rocks, a football match soon developed. It was not a classic, but our motley English team emerged victorious. Not the ideal end to a hard day’s cycling, but the taste of victory, however meaningless, numbed the pain in our aching legs.

Looking back during our ascent in Albania.

Our route through Albania quickly took us up into the mountains and, having ascended to the point-of-no-return, our road abruptly ended. In its place, an uneven, rocky, and almost un-cyclable, track began. Progress was slow, but we inched our way upwards, passing only the occasional goat herder and, incredibly, the local minibus service. Our suffering was lessened by the welcome gift (they refused payment) of some homemade bread, cheese and natural yoghurt from a farmer’s family, whom we stopped to buy food from. After a night spent camped at 1200 metres, in dense cloud, we began to enjoy the spoils of our labour. The next morning, we tentatively descended into a steep-sided river valley. Our track wound its way down the valley and the views it afforded were worth the bone-jarring descent. 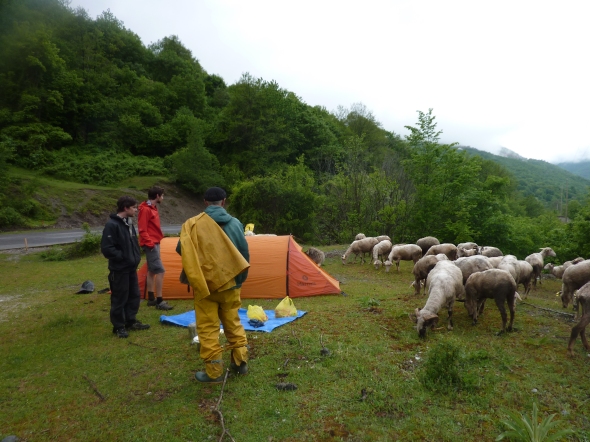 Locals flocking to meet us.

From Albania, we crossed into Macedonia and quickly left civilization behind. In preparation for a large ascent the next morning, we spent our first night in Macedonia camped next to what our map claimed was B-road. Ominously, there was little traffic, with the exception of a herd of sheep, along with escorting sheepdogs. Lo and behold, the next morning we discovered that the road petered out and no track clearly replaced it. Fortunately, we managed to recruit a elderly Macedonian villager, who spoke no English, to act as our mountain guide. After communicating to us that the track/road on our map was blocked by a metre of snow, he lead us up a few kilometres of sheep tracks. Eventually, we stepped out onto a passable track that lead us in the right direction. As we might have predicted, this track soon turned into little more than an over-sized path, which conveniently doubled as a stream bed. The descent was exhilarating, but tough on our nerves, as we fought a constant battle to prevent our wheels slamming down into the rocky gullies which crisscrossed the track.

Exhausted and in need of some recuperation, we headed to the town of Kicevo to find shelter. Befitting of our heroic off-road exploits, a group of local kids gave us a guard of honour as we entered the town. Eager to practice their English, they questioned us about our trip and even offered to act as guides, which they did admirably. Looks like our fifteen minutes didn’t end in Albania. 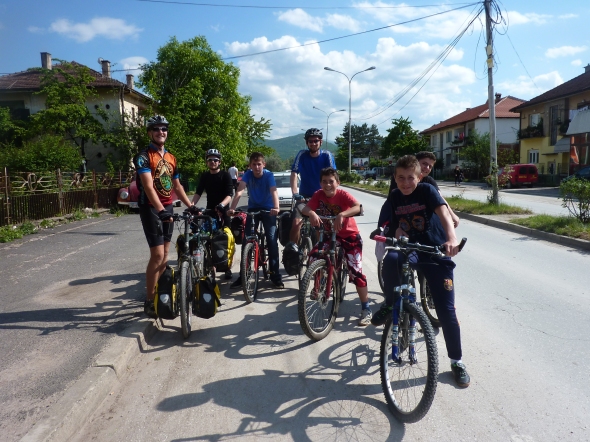 Our entourage in Kicevo.