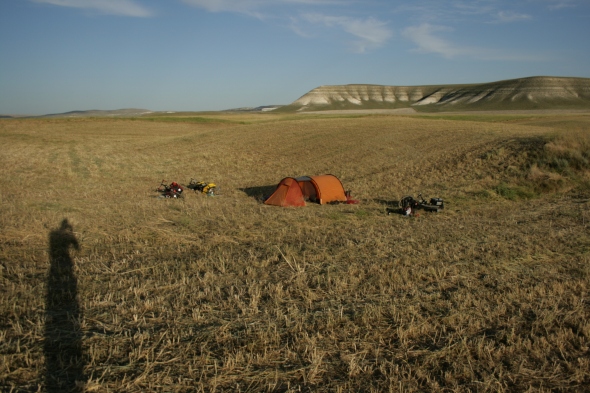 One of our campsites from the last week.

Cappadocia has been reached and, with it, luxuries like reliable internet access are once again available. Therefore, it is time for this blog to retreat from the surreal and re-enter the realms of reality; free from lycra-inspired fantasies.

That being said, the past week has been a colourful one and requires little embellishment. First of all, it should be pointed out that, in spite of the headlines coming out of Turkey, we have seen no signs of unrest and are unaffected. This is hardly surprising, since we have been travelling through the remote, and very agricultural, central region of Turkey. The sedate çay (tea) drinking farmers that we have been chatting with contrast quite sharply with the rock-wielding urban youths filling TV screens. 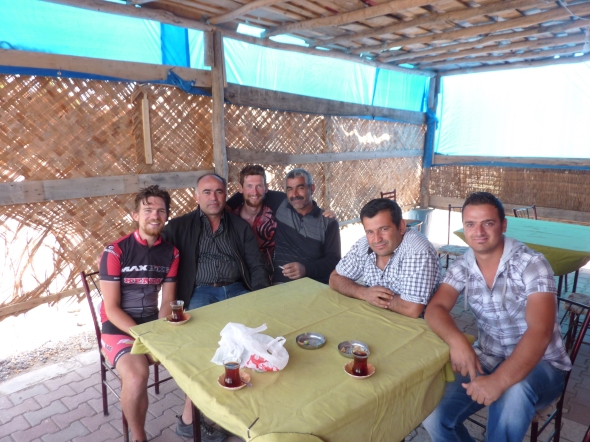 One of our cay stops.

And along with these çay drinking farmers have come many invitations to join them for a glass or two. People have been intrigued by us and are desperate to question us about our intentions or inspect our bikes. It would be churlish to refuse such offers, so we have stopped as often as is feasible. Such situations usually involve us having to mime our answers to the questions that they may, or may not, be asking. Despite this difficulty in communicating (few people in Turkey speak anything other than Turkish), our çay stops have been very enjoyable and the gist of our intentions generally seems to be understood.

It is not only the local people that have taken an interest in us. Early in the week, near the city of Eskisehir, we received our first visit from the local police. Camped on a village football pitch, we initially assumed we might be moved on. However, it soon became clear that we were being welcomed, not evicted. After a thorough examination of our passports, which consisted of reading aloud the countries we had visas for, the conversation turned to football and our cooking skills.

For more details and a dose of melodrama, check out Andrew’s account below. 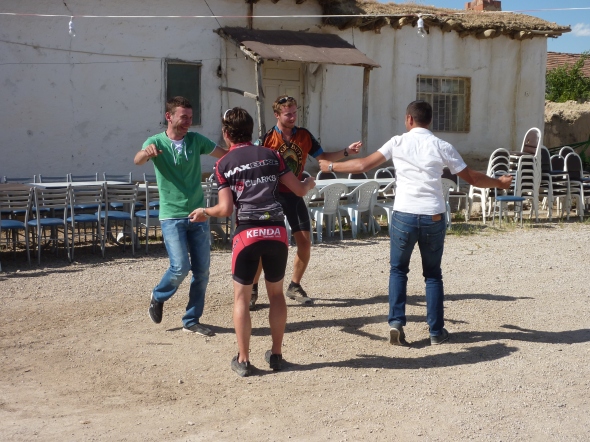 A Turkish dance-off. In Lycra.

In fact, Turkish hospitality has so far been unfaltering and something we have experienced during almost every interaction we have had with strangers. Only a few hours after one of our many çay stops, a car stopped in front of us and the occupants urged us to follow them if we wanted some food. A little puzzled, but as always hungry, we followed them. It soon transpired that we were gate crashing some kind of wedding party, but no-one seemed the least bit concerned. After a delicious meal, we were interrogated and then invited to try our hand at Turkish dancing. Therefore, Andrew and Josh, still clad in lycra, did their best to please our hosts, largely at the expense of their dignity. However, it appeared to work and, following a hard fought dance-off, the entire crowd seemed to have been thoroughly won over. Making our excuses, we left before they could initiate round two. 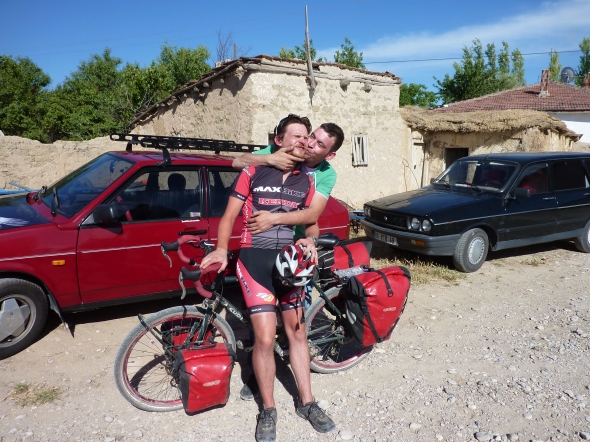 In fact the only downside of the last week has been our discovery of ‘Turkey Tummy’. Given the amount of questionably prepared food that we have been eating, it is no surprise that we have now all experienced this malaise in equal measure. There is no need to go into to details, suffice to say that our progress has been significantly hampered by this unpleasant phenomenon. However, as ever Turkish hospitality has lessened our pain. After a tough day of cycling into a headwind and with both Andrew and Rob suffering with a tough case of ‘Turkey Tummy’, the village of Tepekoy provided the ultimate example of why Turkey is the perfect place to be a touring cyclist. 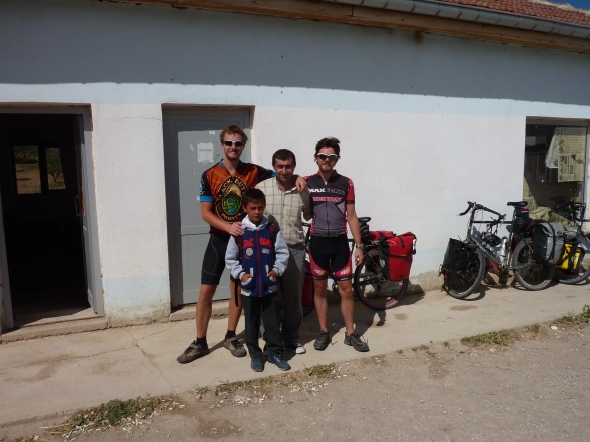 The legendary shopkeeper in Tepekoy.

We rolled into the village exhausted, but soon discovered the village shopkeeper to be incredibly helpful and welcoming. Through broken English and Google Translate, he offered us a place to pitch our tent and freshly cooked food. Then, when the wind proved to be too strong and the ground too hard, he immediately offered us a small room to rest in. Of course, payment was out of the question and he was determined to help us as much as possible. Furthermore, the rest of the village were fascinated by us and eager to help. The extent of this desire to aid us was highlighted when, ten minutes after we had lay down to sleep, our door burst open and an elderly man came in, proclaiming, “Cola! Cola!” Setting down three small bottles of Coke, he looked at us, smiled, and then bid us goodnight. 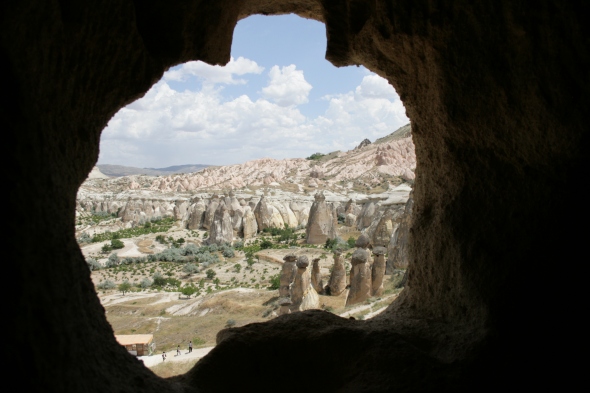 Looking out at the rock chimneys from inside a cave room in Cappadocia.

Eight days after leaving Istanbul, we have now finally made it the village of Goreme, in Cappadocia. Despite this detour adding a couple of hundred kilometres, the chance to explore the stunning rock formations and carved stone dwellings has made it worthwhile. It is also a chance for us to enter a village without being stared at and immediately swarmed by curious locals. Goreme is a tiny tourist bubble, where we are no longer a novelty, which feels rather strange. Up until last night, we were far more likely to run into a pack of wolves than a pack of tourists.

It was the sirens we heard first, reverberating round the valley like a law-enforcer’s call-to-prayer. Then they were on us. Five men, two cars, one sub-machine-gun. It began friendlily enough; they just wanted to see our passports. “No Problems”. We should have known it couldn’t last.

The atmosphere changed in a moment. The Sergeant pointed his finger at me like it was a lance, and I felt his men close ranks around us. Beside me I could sense Josh and Rob tensing up. This was serious. When he spoke, it was more like a growl: “English?” Trembling, I nodded. Then came the question we had all been dreading: “Which football team?” The sweat trickled down my brow as I paused: trying to steady my breathing, clear my mind, and guess his allegiances. When the silence became intolerable, I decided on the truth: “City” I replied. Wrong answer Punk. Apparently without thinking, he unbuttoned the strap on his holster. The gun remained where it was, and I realised with relief that he wasn’t United. “Chelsea” he stated, but his face lacked conviction. We had one more chance.

He looked me in the eye once more: “Turkish Team?” he Demanded. I was out of my depth here. “Galatasary” I replied furtively. The man with the machine-gun broke into a smile, and gave me a thumbs up. The odds had shifted in our favour: now we had firepower on our side. But still the Sergeant wasn’t satisfied. He pointed The Finger at Rob and Josh, then lifted his arms in a grotesque impression of a bird-of-prey. This was a clue, and our freedom hung upon it. Josh’s turn to guess now: “Besiktas” he said, with a quaver in his voice.

The ensuing silence seemed like an age. Thoughts of Turkish cells, and violent beatings chased each other around my mind. Then the Sergeant’s face broke into a smile, and he was embracing Josh like a lost brother. We were safe.

Getting Greasy in Tbilisi »
« Vulgaria