Out of the Panj, into the Fire

I am keenly aware that my MA in Medieval Studies leaves me with absolutely no qualifications to make comment on civil engineering projects of any kind. If however, by some quirk of fate, I was asked to author the 2014 Tajik roadbuilder’s bible, I would begin with three Golden Rules:

Life on The Edge

1. A road surface should be smooth and flat.

2. Avoid building your road in a location where boulders the size of cars are prone to fall on said road, and the road itself is in danger of sliding down a 300m precipice.

3. If rules 1+2 cannot be followed, provide a raging torrent at the bottom of the precipice to remove bodies and debris.

Fortunately, although the first two rules are broken on an almost permanent basis, the third generally remains intact. What Tajik roads lack in safety features however, they more than make up for with stunning views of mountains, glaciers and rivers. They also have excellent smuggling links with Afghanistan, making this a perfect destination for both adventure cyclists, and Opium traffickers.

Afghanistan is just a stone’s throw away across the Panj river (literally, as I finally proved),and it is hard to beleive that less than 100km from where the locals shout and wave to us across the river there is current Taliban activity.

Tomorrow we head towards the Pamir plateau, and finally Osh in Kyrgzstan, where Andrew will return home at the beginning of August.

As a final note, we would like to extend our thanks to Etihad airways for allowing Josh to transport his Guide Falcon: “Etihad Airways accepts the carriage of falcons and guide dogs to lead the blind in the main aircraft cabin provided that all the necessary health documents and important licenses have been obtained.” 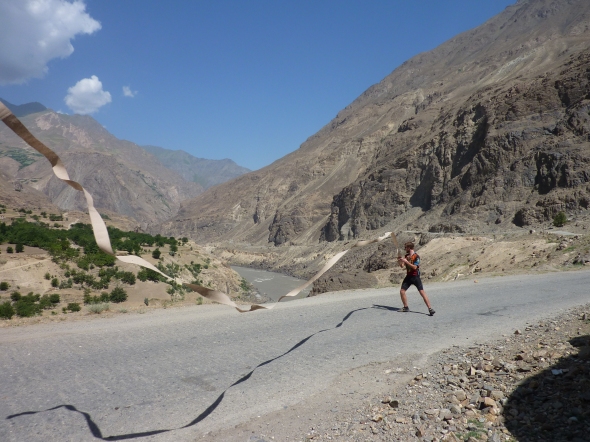 One thought on “Out of the Panj, into the Fire”