A Wales of a Time

Having nobly given up cycle-touring for Lent, Maundy Thursday arrived, and Andrew and Rob prepared to celebrate Christ’s suffering at Calvary with a suffering of their own somewhere in the Welsh borders. 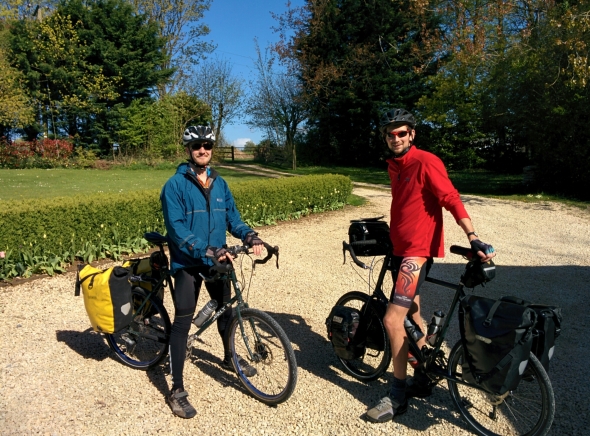 I don’t know if the disciples ate curry at the last supper, but if they didn’t they were really missing a trick, and if the son of God didn’t then get to wash it down with a swift pint of the local pale, then the poor guy must really have been cursing Barabbas.

Andrew helping a lamb with a gambolling problem

Finally the time came for us to set off, and for me to dispense with this shoehorned seasonal metaphor. The trip began as inauspiciously as all Tourient expeditions seem to, and without Josh around to unscrew pieces from his bike and make them fall onto roadsides, Rob did what he could as we spent the best hours of the morning searching fruitlessly for his bike computer. Eventually we got going, and almost managed to leave Cirencester before the first mechanical failure on Rob’s bike became apparent. Undeterred, we battled on and made an impressive further 20 miles or so before the next major mechanical catastrophe occurred.

After that, luck turned in our favour, and the next two days passed in a blur of rolling hills, daffodils, lambs, sunshine, and frigid temperatures interspersed with occasional brutal climbs and altercations with the yurt-owning classes.

Aiming to make Hay-on-Wye while the sun shines

When morning came on Sunday, we rolled the stone away from our canvas tomb and headed for the border, keen to return to a land which hadn’t been the subject of some kind of draconian ban on vowels, good beer, and all but a handful of surnames. The morning’s ride was decent enough, but by the time we had crossed the Severn bridge and begun the climb back to the Cotswolds the rain was falling hard enough that had anyone chosen this particular Sunday to resurrect themselves, they might have been tempted to return to the underworld, which I understand is, at least, warm and dry.

The rain was so bad in fact, that it is prompting Rob to fly to a desert on Thursday. Seriously, it was that wet.

Back to Black (Mountains)

A quick word from Rob:

The time has once more arrived for me to flee this green and pleasant land. Those who have not seen me in the flesh recently might have assumed that I was grinding my way through Thailand’s tropical landscapes. However, despite my previous blog entry, my plans to fly to Bangkok did not end up materialising.

Work, weather and my own ineptitude meant that South East Asia soon became an infeasible option. Instead, Almaty (Kazakhstan) is my new starting point. On Thursday, I set off to link up with the my route from last summer; a satisfying continuation of the Tourient Express’ Silk Road journey.

From Kazakhstan I will race directly towards China and – with a Chinese visa this time firmly in my possession – I will begin my journey east, across the wilds of Xinjiang. Deserts, mountains and language problems all await me. But so too does the chance to explore a fascinating region and learn more about a country that remains intriguingly different.

Once my Chinese travels have run their course, Vancouver beckons and my grand tour of the Americas begins. For more idea of where I’m going check out the route page.

Another of Andrew’s famous ‘shortcuts’

Baby Steppes »
« Merry Christmas from the Three Kings of Tourient!

One thought on “A Wales of a Time”