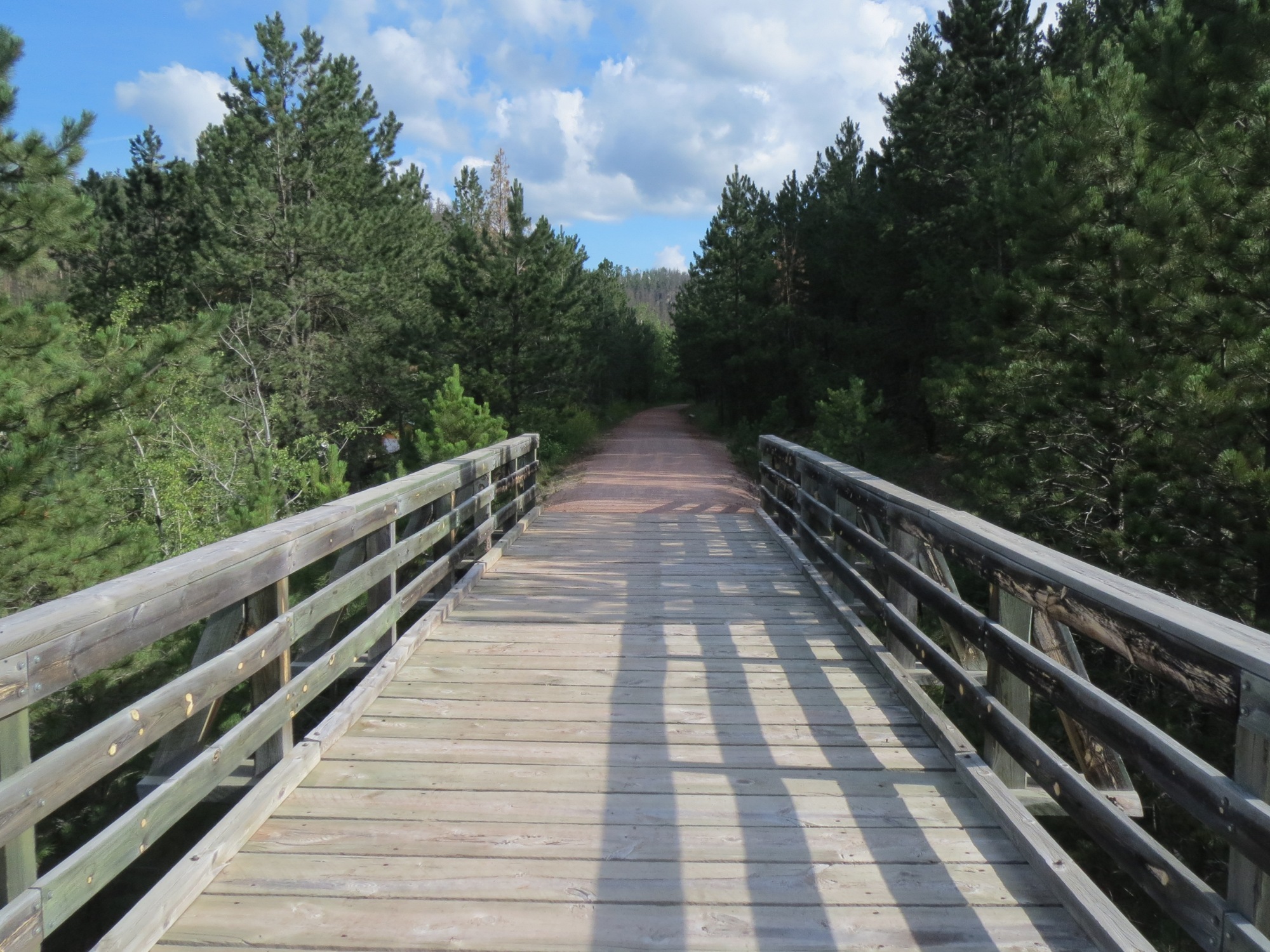 Time has flown by almost as fast as the Midwestern landscape and, once again, I find myself thousands of kilometres further east, without having updated this blog. Wyoming is now a distant memory, but it was on its eastern fringes that my last post finished.

Leaving this wide-open state behind, we crossed into South Dakota and the Black Hills. As we left the plains, we were greeted us with a lavish sprinkling of precipitation. Accompanying this watery welcome was a blanket of thick grey clouds, which dampened our enthusiasm for this much-awaited change of scenery.

However, the quiet atmosphere of the immaculately maintained Mickelson Rail Trail made up for this less-than-ideal weather. And by the time we made it to Mount Rushmore, the sun was illuminating George Washington’s chiseled features. A rather cringe-inducing but nonetheless impressive sight, this vast sculpted peak was under attack from hordes camera-wielding tourists.

After a few minutes admiring this bizarre construction, we left the waddling masses behind and headed towards Rapid City. With more than three weeks of cycling having passed since we last rested, we had hoped that Rapid City would provide the opportunity to spend a day away from the bikes. Unfortunately however, luck had conspired to thwart us and all of the city’s Warmshowers hosts were either busy or away.

So it was with some lethargy that we cycled into the city. But as we neared the outskirts, a car stopped and a young man, sporting long hair and a battered feather-adorned hat, flagged us down. Within a few minutes we had a place to stay and plans for the evening. It just so happened that we had stumbled upon Tom Tolman, Rapid City’s very own patron saint of touring cyclists.

Tom and his family were incredible hosts, immediately making us feel at home. The next day, we did indeed get the chance to abandon our two-wheeled steeds and headed back into the Black Hills, to climb the impressive Mount Harney. After a freak rainstorm and a sumptuous steak dinner, we set out to indulge in a passion that Ben, Tom and I all shared… beer. Of course, we rather overindulged, so it was with aching heads and some regret that we said goodbye to the Tolman Family the next morning. 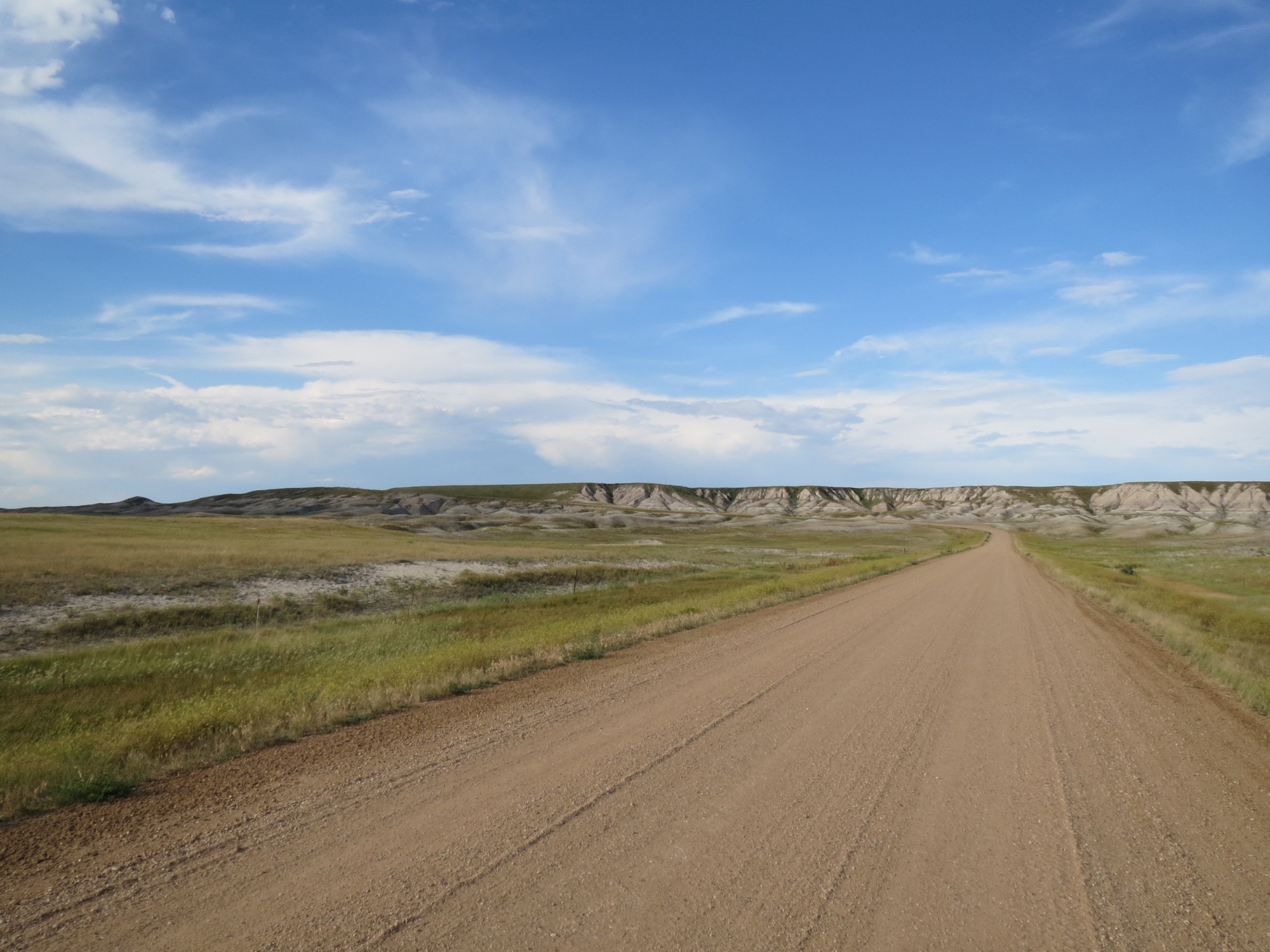 Fortunately, we had the surreal scenery of the Badlands to look forward to and these colourful, naturally sculpted rocks made for an impressive cycling backdrop. However, after a couple of days, we left this Martian landscape behind and were soon working our way across an endless expanse of rolling farmland.

Much to our chagrin, we were not making the rapid progress that had been predicted. Before long, a fearsome headwind had risen up, increasing by the day and bringing with it rain showers and suffocating humidity. Several brutal days followed, with Ben and I taking shifts at the front of our two-man peloton, allowing the other person a small amount of respite. Eventually, soaking wet and exhausted, we arrived in Sioux Falls.

It was here that Ben and I finally split; I headed south towards St. Louis and he continued east, towards Chicago. However, as a fitting parting gift, our host, Travis, made sure that we both left sleep-deprived and hungover. The potent combination of happy hour prices and an attractive, cycling-mad barmaid had made the previous night a particularly late one. 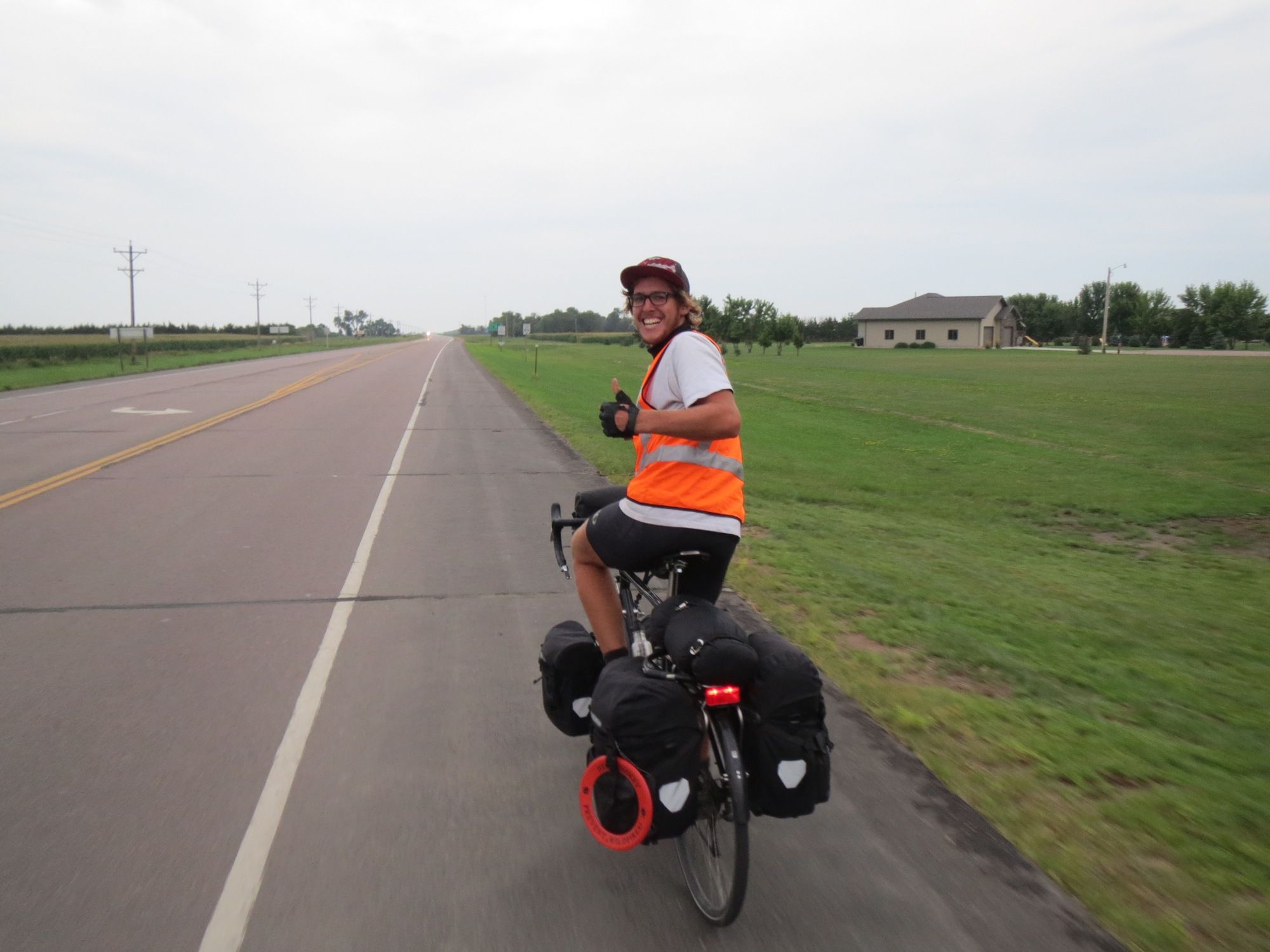 From Sioux Falls, I hurtled southeast, through the pleasant, but forgettable, farmland of Iowa. Along the way, I took advantage of a number of peaceful cycle paths, including the Raccoon River Valley Trail. It was whilst on this trail that I was interviewed by a curious local cyclist. Thinking nothing of it, I was amazed to find myself already on the trail’s website by that afternoon (the article can be found here).

After these trails finished, I found myself deposited on the outskirts of Des Moines, Iowa’s capital. Passing through the city, with its attractive Capitol and labyrinthine network of tree-lined cycle paths, was surprisingly nice. Quite a contrast to the picture painted by Bill Bryson, if I recall correctly. However, soon I was leaving Iowa’s farmland behind for the swampy forests of the Mississippi River Valley. 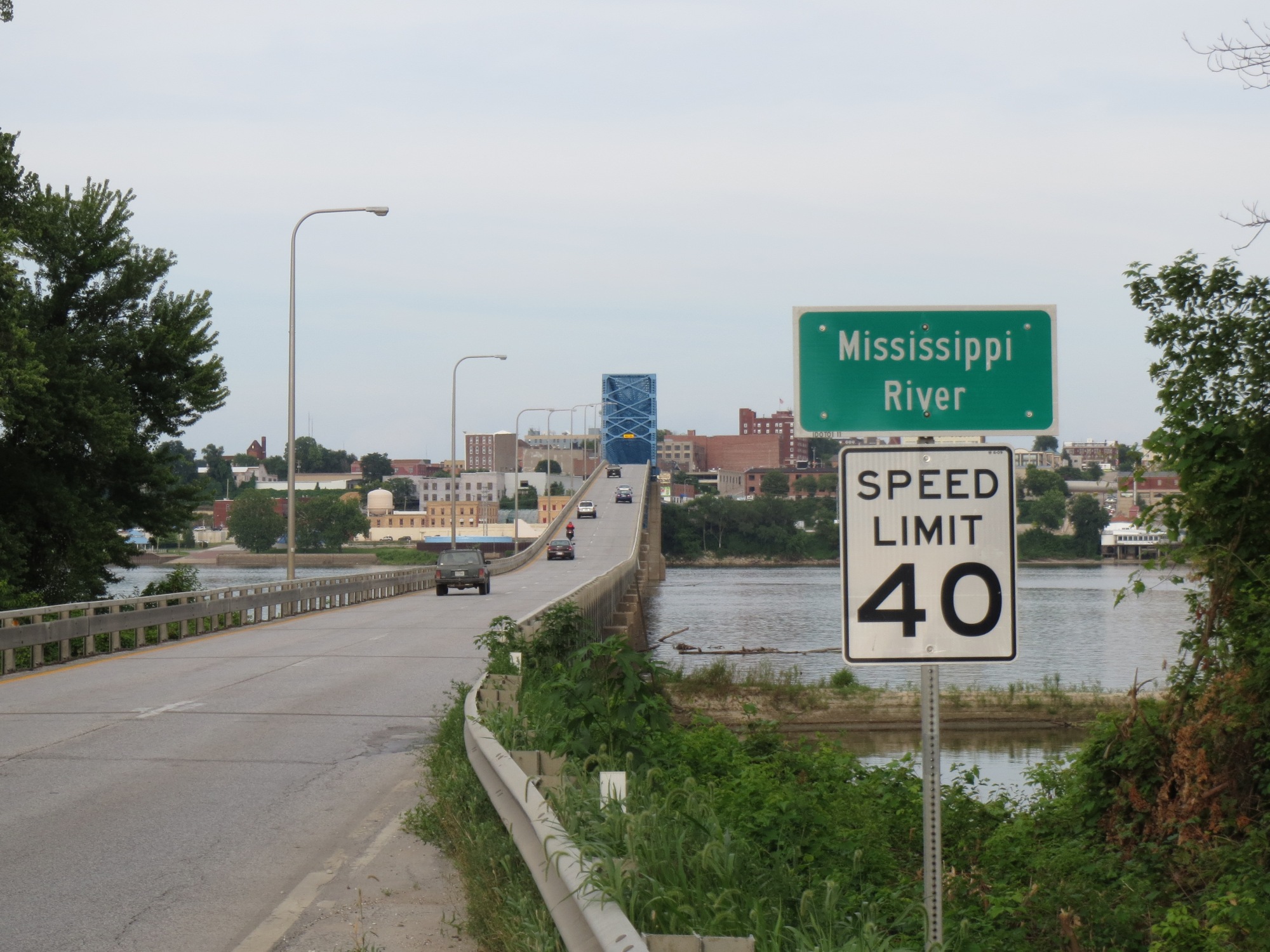 The vast expanse of the Mississippi was an impressive sight, but apparently Mother Nature wasn’t impressed; it needed a top-up. And so, I endured a miserable couple of days of, often torrential, rain. Therefore, it was with some relief that I finally reached St. Peter’s, a suburb of St. Louis. Here, I met Ben (a different one!), whom I had worked with in Korea. Although one of my closest friends whilst I was living in Korea, I had not seen Ben for nearly two years, so it was quite a shock to see him in the flesh once again. 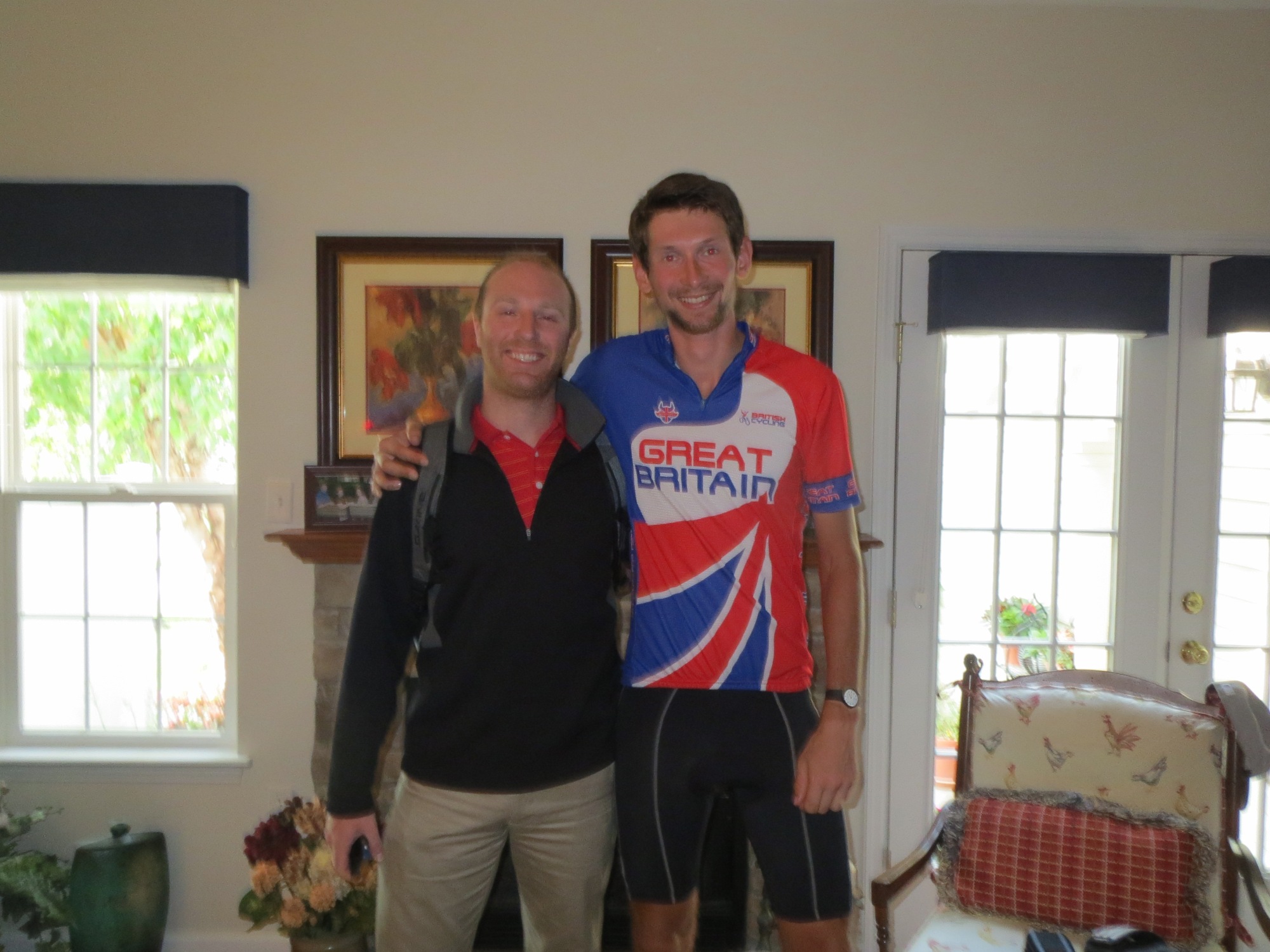 After some time spent reminiscing about our favourite students and hazy soju-fuelled nights, I eased myself back on to my bike. Heading northeast, I set out to cover the short (by my standards) distance to Chicago. By now, cycling through flat farmland has become effortless. With the aid of an audio book or two, I have become oblivious to the landscape, cycling in a dreamlike stupor.

The four days it took me to reach Chicago were much like this and, looking back, few memories of scenery present themselves. In fact, the most memorable sight was undoubtedly stepping outside one morning to discover the street covered by a foot of water. I had been staying with a Warmshowers host in Dwight, on the historic Route 66, and three inches of overnight rain had turned the local roads into rivers.

Now, however, I am safely in Chicago. Here, I am staying with Holland, another friend made whilst working in Korea. Where I go next is still undecided, but with less than two weeks left on my visa, it is safe to say that my next blog post will be from America’s liberal next-door neighbour.