A Farewell to Firearms

Climbing up on to Skyline Drive

As fate would have it, my much-needed chain ring did not materialise until 2pm on the day of my departure from DC. This meant a frantic dash to get clear of the city before darkness fell, as well as the loss of precious cycling time. Undeterred by this poor fortune, I resolutely decided to make up the lost distance over the next few days. 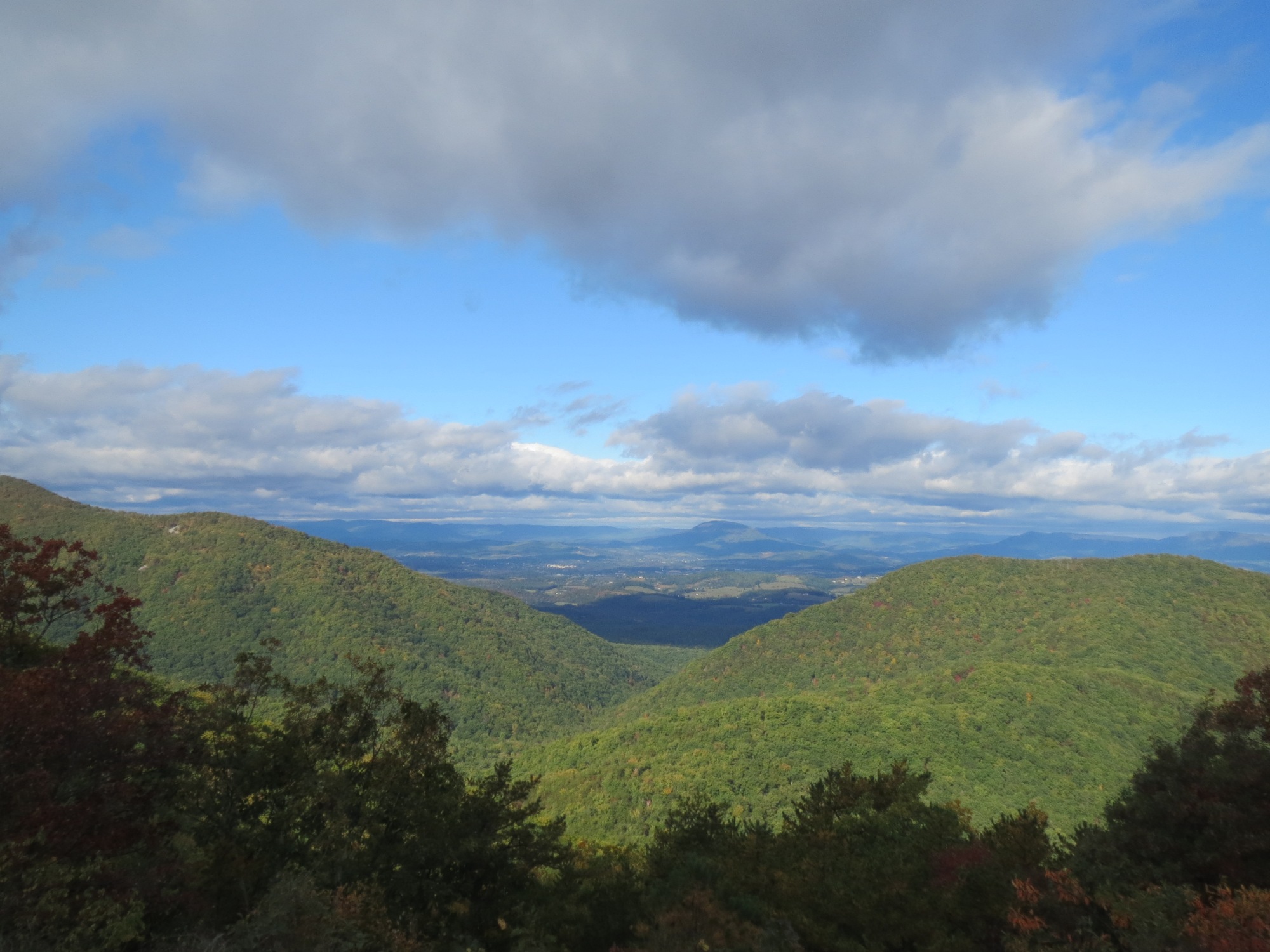 However, it just so happened that I had chosen the scenic route for the next stage of my trip. Ignoring the flat cycling of the coastal areas, I headed almost due west, back on myself and into the hills. Here, I sweated my way upwards and joined the appropriately-named Skyline Drive. In turn, this would soon become the Blue Ridge Parkway. 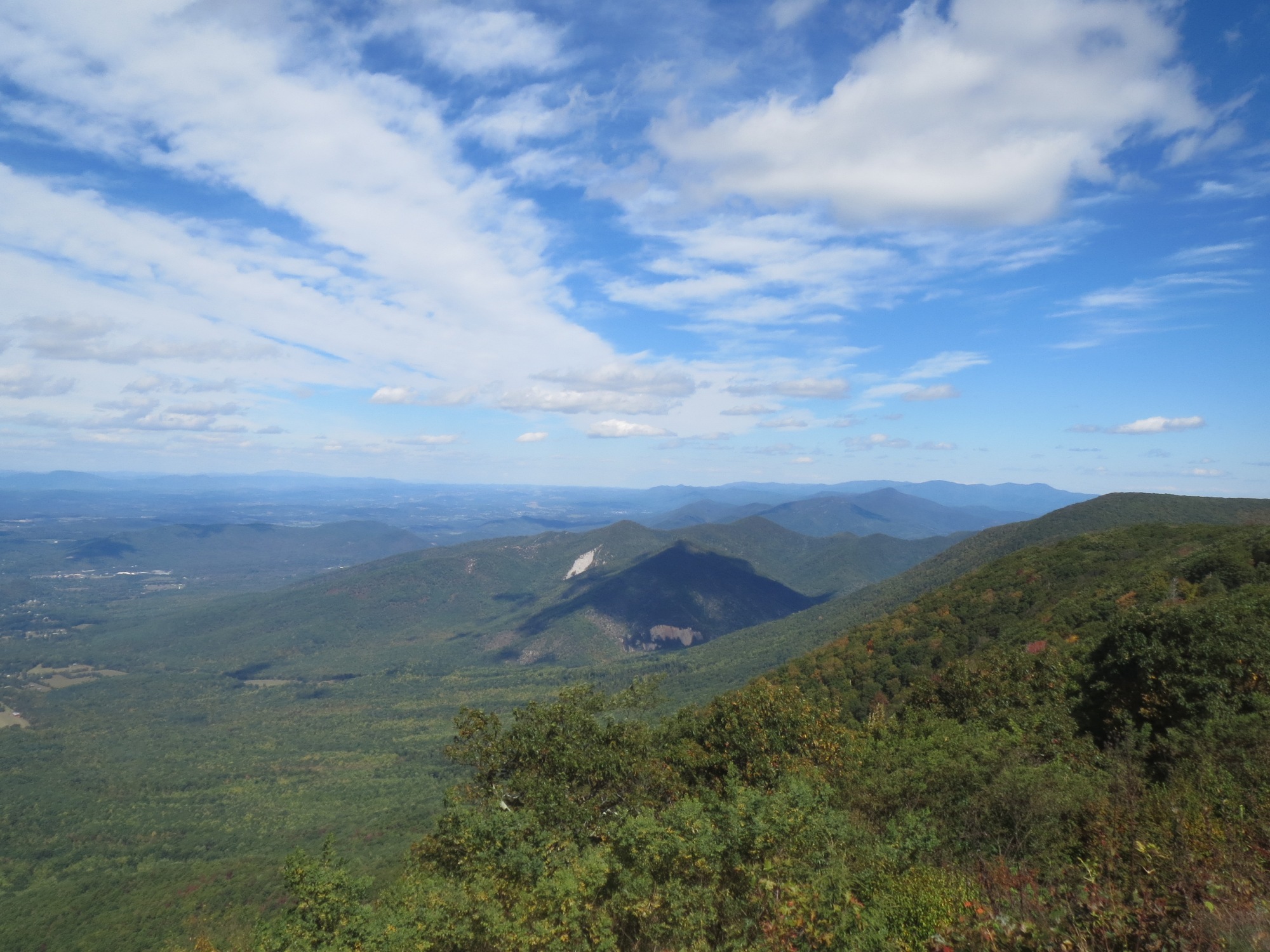 Remarkable feats of 20th-century engineering, these stunning roads run along a series of richly green ridges, offering views of the valleys below. They largely ignore civilisation and intentionally flout many of the other conventions of modern road design. Instead they form a peaceful, isolated strip of asphalt that stretches almost 1,000 kilometres, along the backbone of the Appalachian Mountains. 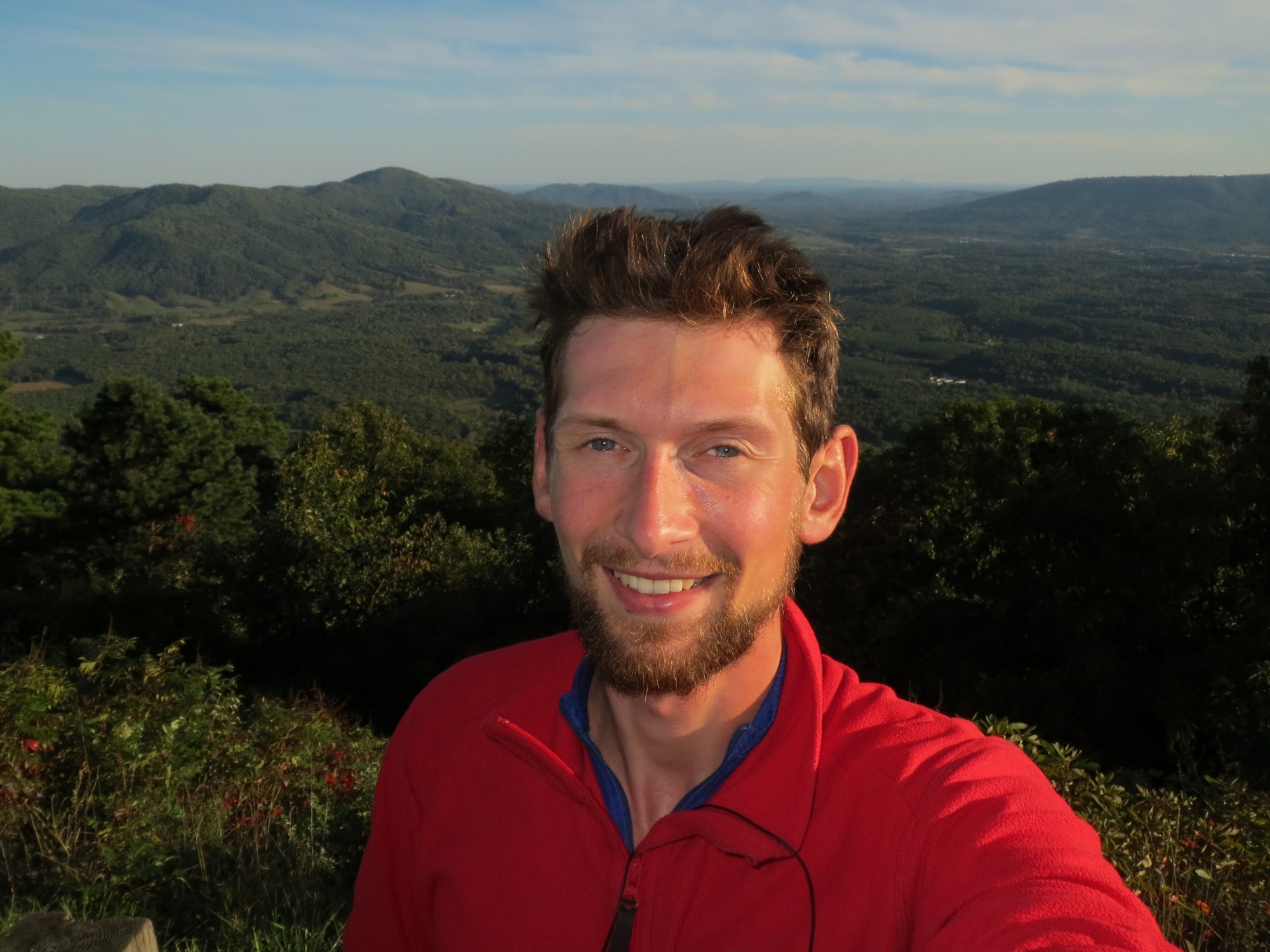 There is always time for a selfie

Of course, such terrain is not ideal when looking to make up for lost time. But this was soon pushed to the back of my mind as I began to revel in the gruelling climbs and splendid views. Flat cycling became a thing of the past and my legs started to enjoy the rollercoaster rhythm of this undulating route. The road took no prisoners and, sticking to the ridge with an exhilarating doggedness, it wound its way ever onwards. 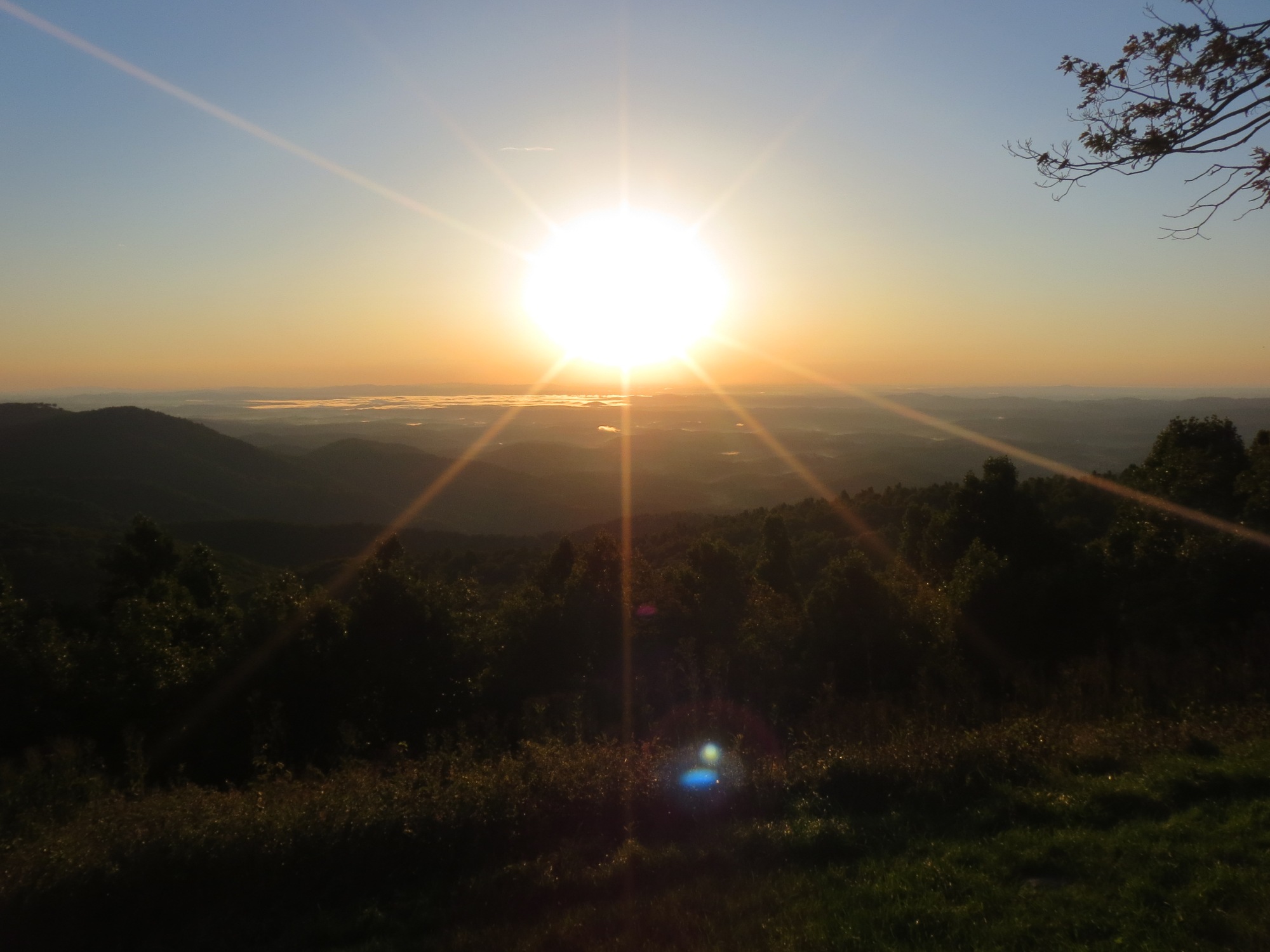 Sunset over the Appalachians

I quickly adapted to this beautiful, painful new routine; days became longer and I cycled from dawn until dusk. Pitching my tent in the trees was easy enough, but finding food, water or flat ground was more of a challenge. Eventually, after four full days of ridge-top cycling, I dropped back down into the valleys. In this short time, I had dragged my plans back on track, covering more than 480 kilometres and climbing around 8,500 metres in the process. 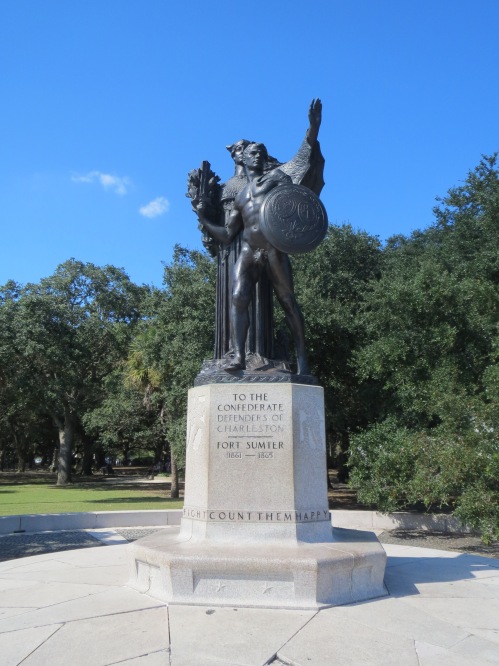 Remembering those who died defending slavery. What an honourable demise.

Once back on more conventional roads, the rolling landscape of North Carolina flew by. I was soon into the humid lowlands of South Carolina, eventually coming to a halt in Charleston. Here, I met up with Bradley, another friend from South Korea. He was eager to immerse me in the local culture, so after a whistle-stop historical tour, we soon found ourselves drinking Budweiser and watching lycra-clad men wrestle for an egg.

Unfortunately, even this unique insight into these authentic North American traditions could not prevent me from continuing and – after a few days spent catching up with Bradley – I was back in motion. From South Carolina, I crossed into Georgia and began to follow the coast south, towards Florida. For once, the flat cycling didn’t bore me and I enjoyed the Spanish-Moss-adorned trees and humid marshlands. Whilst uninspiring, this foreign landscape compared favourably with the cornfields of the Midwest.

Before long, the sandy beaches and palm trees of Florida appeared. And soon afterwards, the sea once again vanished, whilst Orlando materialised in front of me. Here, my great American journey ended and I set my mind to the logistical challenges that lay ahead.

Fortunately, my extremely helpful Warmshowers hosts, Chris and Pam, have made my life much easier. With a minimum of effort, I have secured a box for my bike and a lift to the airport. Such wonderful generosity and hospitality is only a fair reflection of my time in the United States. During these last few months, stereotypes have been both reinforced and shattered, states have been ticked off and new friends have been made. But it has all seemed to happen in little more than an incredibly enjoyable heartbeat.

Of course, there is no time to reminisce, for my next target lies ahead. The alluring mystery of communist Cuba is an exhilarating prospect, offering a stark contrast to the pampered consumerism of the last few months. However, the next stage in my journey also represents a departure from technology; and it is likely that blogging from the island will be an impossibility. Therefore, it is highly probable that my next post will only be possible upon my return to the 21st century, and the technological luxuries of the UK.

Havana Blast »
« One Chain Ring to Rule Them All

6 thoughts on “A Farewell to Firearms”